“BTS! BTS! BTS!” That is what the mega popular K-Pop boy band from South Korea were welcomed to the stage at KIIS FM’s Jingle Ball 2019, Presented by Capital One®, in Los Angeles at The Forum on Friday, December 6.

After their management company BigHit Entertainment announced Jungkook, Suga, J-Hope, V, Jin, Jimin and RM would go on an extended break this past August, the "Mic Drop" artists were ready to return to the stage at the annual concert, which is part of the national iHeartRadio Jingle Ball Tour Presented by Capital One, the season’s spectacular music event which captures the music and holiday spirit of the iHeartRadio app.

“We are the opening artist! Such an honor to preform here,” BTS told the sold-out crowd at The Forum after opening the show with “Mic Drop.” “We are on the same stage with legends — this is the best holiday ever!” they added, gushing it’s been a “great year” and now they can celebrate with their fans ahead of making 2020 an even better year.

“In 2020, we’re going to make it right together!” the activists exclaimed to an ecstatic crowd, some of which waited outside in the rain to score free tickets and a chance to join the BTS meet-and-greet backstage.

The "Nightmare" singer joined the stage in a coordinated Chanel ensemble, with Chanel suspenders, a white shirt and black slacks.

Their performance comes on the heels of Halsey and BTS’ brand new collab. On December 6 the team dropped emotional track “SUGA’s Interlude,” which features Suga, whose real name is Min Yoongi. The song was penned by Yoongi, Halsey, and Lido, and the lyrics immediately captivated the BTS ARMY. 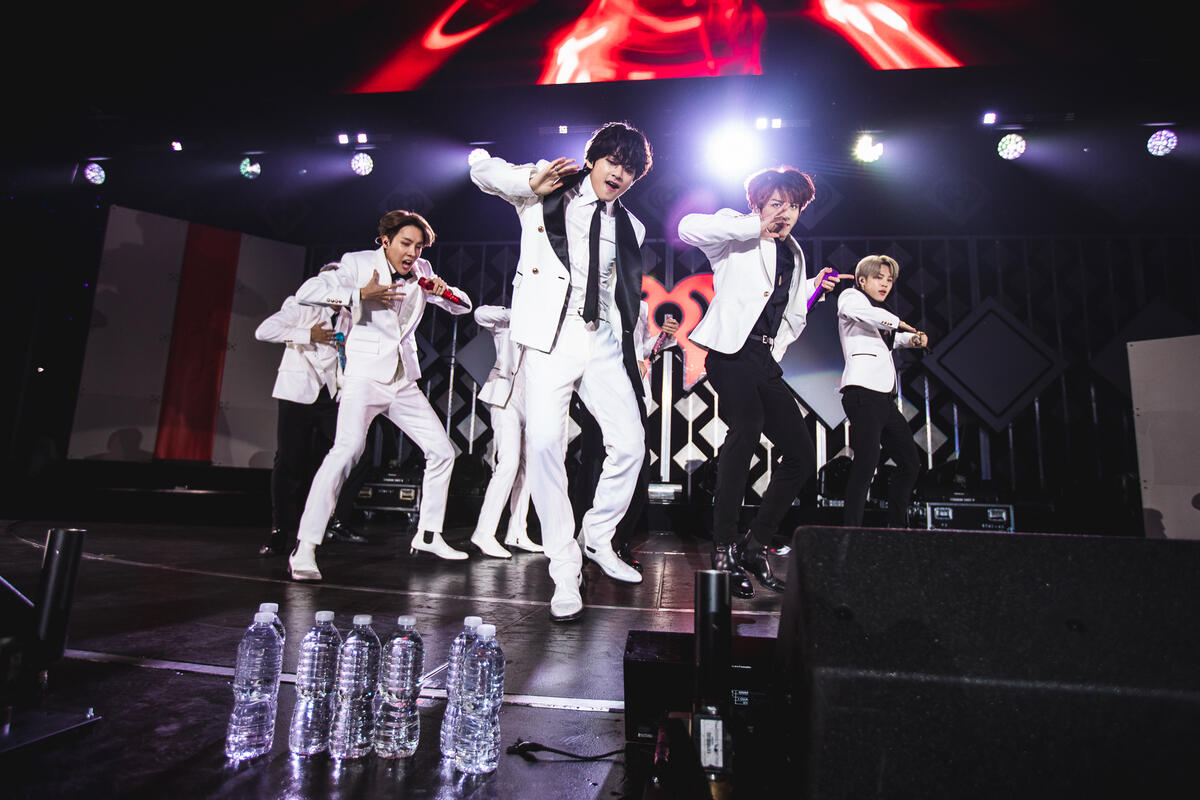 “I've been trying all my life / To separate the time / In between the having it all / And giving it up, yeah,” Halsey sings in English, before the pair reflect upon chasing their dreams.

BTS’ collab with Lauv for the remix of the Ed Sheeran penned song “Make It Right” also came out of mutual respect.

“Lauv was, like one of the best ones. We just wanted to collaborate,” BTS previously told iHeartRadio. “Like, he was up top there for our collaborating wishlist. And, when we were touring [in the] U.K, we had [a] Wembley Stadium show, and he said he wanted to come there, and we just met each other. And we were saying like, 'Let's work and let's collaborate,' and it just happened really naturally.”

See the best moments from 102.7 KIIS FM's Jingle Ball Presented by Capital One held on December 6, 2019 at The Forum!